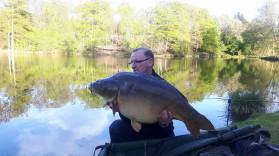 These are the numbers

Check out the vlog by the DXC  guys at https://youtu.be/Gbe3b1_WU8g

Now that the fishing has stopped we have spent the rest of 2018 doing some much needed maintenence work including the removal of two large trees that had fallen into the lake, the replacing of the netting around the island to enable us to use it as a stock pond and hopefully grow on some of the smaller fish. We have also replaced the platform by extending the bank out into the lake making a bigger area with a slightly lower part for returning the fish. We have also extended out into the lake at the next swim along to give a bit more room for bivving up etc. The chalet has also undergone a facelift with interior floors being replaced and decorated throughout. We are hoping to do further improvements before the start of the 2019 season.

2019 got off to a good start by replacing the  fabric gazebo on the platform swim with a sturdy wooden one, great for keeping out of the weather. We also improved some if the path ways around the lake

and renewed the boardwalk down to the inlet.

very slow week with the fish not really playing ball, still good week had by everyone.

Week 27th-4th May: Glenn and Nathan

Great week for these guys once again

Week 4th-11th May: Will Andy Paul and Aaron

Another great week for the DXC angling guys

This week saw the first 60 of the year, great fishing guys

This week saw the return of our mate Ninja Jack, great to see you all again and to see the brilliant two weeks fishing you had despite some horrendous weather conditions. New Pb for Scott a 59lb mirror, almost the 60 you were after.

What a week this has been with the high point being Manic Monday, where in the space of four hours 2x60s New lake Record 63.5lb and 5x50s. Awesome guys

Extremely hard week due to excessive heat, but still managed to land a couple of nice 50s

Fantastic fishing for these two with several PB's. Lee had a 53lb mirror and Rhys a 48lb mirror.

Amazing week for the guys

No catch report filled out.

Pb's all round this week, 53.2lb mirror fir Russell, 44.2lb mirror for John and for first time fishing a 48.2lb linear for Emma.

Nobody fishing this week, as having decantation pond dug out.

Awesome week with the 5th 60 of the season.

Well as everyone knows 2020 has been a trying time for everyone, with nobody able to travel in the first half of the year, we have got on with the jobs that had been put off for some time. The chalet has had new decking and been  painted, so is looking quite smart now. We have built a new gazebo on the cutout swim and cemented uprights for the gazebo on the dam. Lots of tidying of trees, hedges and bushes saw the lake looking it's best when the first anglers were able to get here.

Week 22nd August nobody gushing due to the quarantine restrictions in the U.K.

What can I say just AWESOME!!!!

Week 26th September nobody fishing due to restrictions

Well that's it for 2020 due to further lockdowns and restrictions. Here's to a better 2021. 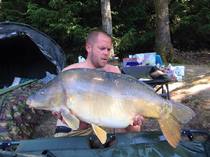 IF YOU HAVE EVER WANTED TO RUN YOUR OWN CARP FISHERY THIS MIGHT BE FOR YOU. I AM LOOKING FOR AN INVESTOR OR PARTNER TO HELP WITH THE RUNNING OF LAC DE LION,THIS WOULD BE A GOOD OPPORTUNITY FOR SOMEONE WANTING TO GET INVOLVED IN RUNNING A FISHERY BUT WORRIED ABOUT GOING IT ALONE. FOR FURTHER DETAILS EMAIL ME AND I WILL GET BACK TO YOU.